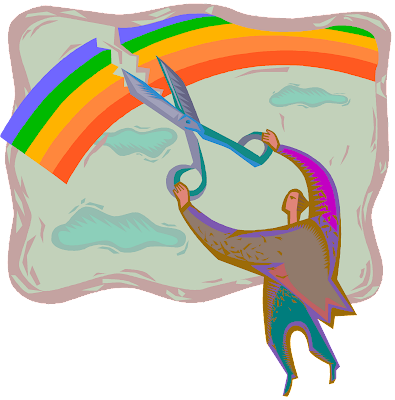 Anyone here against orphans getting families? That's like being opposed to cute furry kittens, rainbows and unicorns, and Santa Claus all rolled into one!

(A) who lacks permanent parental care because of the death, the disappearance of, or the legal, permanent relinquishment of such child by both biological parents;

(B) who is living in the care and custody of an institution;

(C) whose biological parents' rights have been legally terminated; or

That's a far broader definition of orphan than is currently used under any other federal statute because it only requires one of the 4 for the child to be an orphan. It doesn't have to be (A) death/disappearance of both parents AND living in an instutition, for example. A child in an institution is an orphan. But of course she is -- unless you look at what institutions qualify, and realize that it is decoupled from the need for the parents to be dead or gone:

(C) a boarding school for orphans;

(I) any other setting in which permanent parental care is not being provided to the child.

A) means a legally recognized relationship between a adult and a child who is younger than 21 years of age, which is life-long and provides a caring, safe, stable physical environment;

(i) domestic and international adoption;

(C) does not include temporary or long-term foster care, institutionalization, or mentoring.

Again, that sounds good, doesn't it? But LEGAL kinship? What about a child in Africa living with extended family? I'm pretty sure there wouldn't be "a legally recognized relationship between child and caretaker which is intended to be permanent and is evidenced by the transfer to the caretaker of the following parental rights with respect to the child: protection, education, custody, and decisionmaking," as "permanent parental care" is defined in the Act. I doubt the grandmother in a small village taking care of her grandchildren whose parents have died of AIDS is going to have a court decree recognizing her rights. So, the kids are orphans. What about the child in Vietnam, living in an orphanage and visited frequently by his father? He does not have "permanent parental care," it seems. And living in an orphanage, he's an "orphan." And an 18-year-old who has spent her whole life in foster care with a loving foster parent in China is an orphan.
In an Act like this one, it would be imporant for the policy makers to be sensitive to cultural differences in family care and kinship care, and thus recognize that what looks temporary and unstable to Western eyes is perfectly appropriate care in another country. And, indeed, the act says, "In developing policies under this Act, the Coordinator should take into account cultural norms for each country to the extent consistent with the overall purposes of this Act."
In legalspeak, "should" is not "shall;" should isn't mandatory. And even if it were, by saying the Coordinator only has to be culturally sensitive when consistent with the purposes of the act, we're keying back into the definitions that orphan-ize everyone!
So who's this "Coordinator" they're talking about? Well, the act doesn't have any legally binding effect on other countries to turn children into orphans if they fit the Act's definitions. But what it does is set up an "Office of Orphan Policy" in the U.S. with a coordinator who will coordinate diplomacy and development about orphans, as defined, and permanent parental care, as defined. And the Act says that family preservation and unification is a goal, as is permanent parental care, as defined. So what's the big deal?
The big deal is that the U.S. is essentially conditioning the provision of development assistance -- money -- on a country's agreeing with these definitions and thus orphanizing more children. Thus, more and more children than ever will be turned into "orphans," even when they have living parents and/or actively involved extended family.
Because you know what we do with "orphans," right? We find families for them. (Even if they already have family?!) And if new families cannot be found for them in their home country (the Act preserves the Hague Convention preference for domestic adoption -- how could they not?!), then the Act says they should be available for international adoption. And further development aid is available to help countries develop legislation and systems that can lead to international adoption, as well as other technical help. So basically we're incentivizing countries to turn their children into orphans for international adoption.
Here are some places you can look for more information:
Here is the text of H.R. 3070 (the bill in the House) and S. 1458 (the bill in the Senate).
Here are Ethica's concerns, and a statement of support from the Joint Council for International Children's Services.
Read and make up your own mind. I've been hearing about this proposed legislation for a while now, and had heard arguments pro and con (more pro than con out there, it seems). It wasn't until I started reading the text of the bills that I realized the true scope and meaning of this benevolent-sounding legislation.
So put me down as opposed to kittens, rainbows, unicorns, Santa Claus, and the Families for Orphans Act.
Posted by malinda at 5:23 PM

Thanks for putting this out there Malinda, so many people just follow along without actually examining.

This is excellent, thanks, Malinda.

I'm stunned that JCICS supports this, honestly don't get it. I wonder what UNICEF's position is, do you know?

I'm stunned that so many are against it. Really, I think it's a shame you feel the "right" to play with children's lives.

"I'm stunned that so many are against it. Really, I think it's a shame you feel the "right" to play with children's lives."

Thanks for your comment, chad-roscoe, but I would argue that it is the U.S., through the Families For Orphans Act, that feels it has the "right" to play with children's lives -- children throughout the world, children with parents who would be made "orphans" under this poorly-drafted and poorly-conceived Act.

I just wanted to notify you that you were incorrect: the Bill actually does use the word "shall" in its clause regarding cultural sensitivity. You may want to correct that as you actually discuss the importance of the difference between the two.