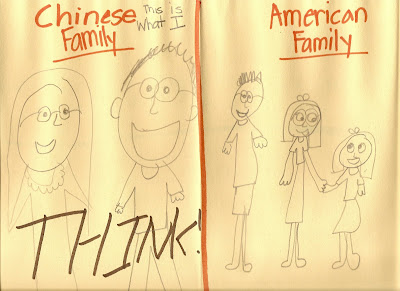 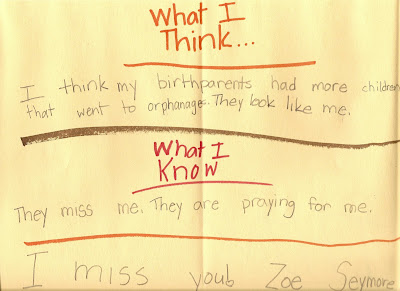 I can't say that I'm surprised that Zoe is already drawing and writing about her birth family at school. Yesterday she only had a half-day, but today was a full day of school and the teacher gave them free time to draw.
Zoe sits at a cluster of desks with three other students, and when she drew her birth parents, the kids were all curious and asked, "So this is what your birth parents look like?!" (Like quasi-stick-figures would somehow capture that!). Zoe corrected them, "No, this is what I THINK my birth parents look like." That's why she wrote "THINK" in capitals and dark ink after she drew the picture. (And notice that her birth parents have glasses, as usual. She's convinced they have them since she does. And also notice that they are smiling -- she draws them with tears on their faces most of the time, since she thinks they are sad and missing her.)
On the back of the paper, she also made the "What I think/What I know" distinction, which I think is great. We are always talking about what we know and what we don't know, and what we think or what we guess; I'm glad to see that it's been making an impression. She's beginning to see what is fantasy and what is reality when it comes to her birth family. And she's come a long way from when she was so frustrated by what we didn't know that she couldn't get past that to do any imaginary thinking.
She's never before shared with me the I Think: "I think my birthparents had more children that went to orphanages. They look like me." We've talked about the fact that she MIGHT have siblings in China, that her birth parents might have had a child before they had her, that they might have felt they needed to have a boy child. But we've never talked about the possibility that other siblings might have ended up in the orphanage.
I wonder where that's coming from. It's true, of course. We've all heard of such cases of multiple girl children being abandoned, one at a time, as the family tries for the boy they think they need. I don't know if Zoe has figured that out on her own, or whether it's an idea that comforts her -- it has been disturbing for her to think her birth parents kept some children, but relinquished her. We'll be talking more about this in the days to come!
Zoe showed her teacher her drawing and writing, and she simply said, "Thank you for sharing that with me." No shock, no intrusive questions, no instructions not to think or to think in a different way about her birth parents. Good answer!
Posted by malinda at 6:47 PM

How cool--she was able to tell her friends about what's on her mind by drawing those smiling, glasses-wearing hypothetical birth parents! I love it. I also love that I can tell who you are by your hair!! You are the only one with short hair! Good thing you included the info on the school form, but it sounds like this teacher "gets it" anyway and would have done just fine without it (do you think they really read that stuff anyway?). clf

Ya, it IS disturbing to think her birth parents kept some children and relinquished her.

Take it from someone WHO KNOWS all about that. My natural mother kept my older brother and my 3 younger brothers. It FEELS HORRIBLE.

I'm glad that she is comfortable to discuss her biological family in school. She's an outspoken adoptee, not ashamed or pressured by her adoptive parent(s) to keep that family a "secret".

What a smart girl! I'm also very impressed with the teacher's response.