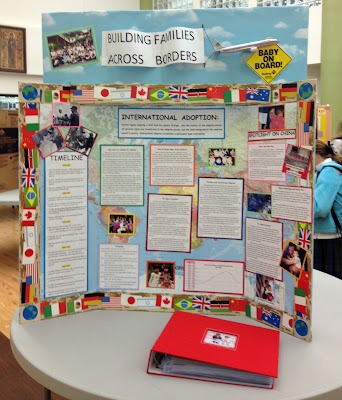 It was a tough project for Zoe, for both academic and emotional reasons.  As an academic topic, international adoption is pretty challenging for 6th grade, especially since it's hard to find just a few sources that cover the breadth of the topic and are comprehensible to a 12-year-old (even a smart 12-year-old like mine!).  Synthesis of multiple sources was the hardest academic challenge for Zoe with this project.  If I knew at the beginning of the project what I know now, I probably would have tried to direct her to something more limited, like maybe focusing on the Vietnam Babylift or just on China adoption.  Oh well, in 8th grade, she has to do History Fair again -- so remind me in two years -- SMALLER, EASIER topic!

In terms of emotional content, there was a lot of hard stuff -- war, poverty, social upheaval -- in both the history and present time of international adoption.  Yes, many history topics are grounded in tragedy, and some 6th graders did handle these topics, but I think for Zoe it really hit closer to home because of her personal connection to international adoption. Even more difficult, this is the first time that Zoe has really confronted problems of trafficking and corruption in adoption.


Still, I think it was overall a positive experience for her.  She was certainly pleased with herself, as you can tell  in the photo below (Maya had to be included in the picture because she also starred in the display board as we used some of our own pictures to illustrate topics on the board, and the red binder in front of the board included pages from each of their adoption-trip albums). 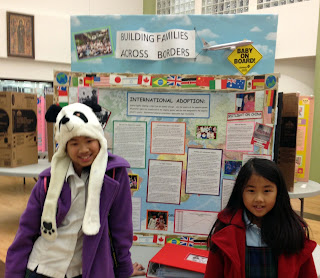 Interesting piece on poverty, adoption and inequality, based on a new study of attitudes of adoptive parents toward their children's birth mothers:


Reproductive health academic and activist writing contains no shortage of articles devoted to untangling the various intersections between access to abortion, abortion stigma, and poverty. The same thoughtful commentary and analysis has been applied to parenting and motherhood, exploring ways that different mothers are subjected to stigma and societal judgment for their reproductive choices based on race and social class. Yet, when it comes to adoption, the intersections with poverty are just as complicated and deserving of analysis yet less examined by those who care deeply about reproductive health, rights, and justice. Since November marks the beginning of National Adoption Awareness Month, we decided to come together to review some new research on adoption and poverty.

It remains true, however, that the women who relinquish or place children for adoption are almost always of a lower socioeconomic status than the families that adopt their children.

How, then, do the intersections between adoption, poverty, race, and class play out today? How are birth parents—most likely living in open adoptions, where they have ongoing contact with their child and his or her adoptive family—affected by these social differences? A new paper by sociologist Kathryn Sweeney examines perceptions of birth parents held by their counterparts: their own children’s adoptive parents.

Sweeney’s primary thesis is that the way our culture understands poverty broadly influences the way adoptions are lived individually. She relates the culture of poverty (that is, the socially-conservative American model for explaining inequality which attributes poverty to an inherent laziness or lack of personal responsibility in low-income communities) to adoption by saying:


“[adoption] perpetuates culture of poverty arguments by assuming that removing children from families is a solution to poverty; removing children implies that the families they are born into are inadequate to raise them… The focus on failures means that connections are lacking to larger economic systems that lead to placements by disempowered birth mothers and give privileged adoptive parents access to children.”

Through 15 in-depth interviews with White adoptive parents, Sweeney examined how they perceive their child’s family of origin, and how those perceptions are influenced by broader ideas of a culture of poverty. The narratives of adoptive parents – even those adoptive parents who recognize the structural causes of poverty—focus on individual choice, individual responsibility, and courage and altruism in making adoption decisions. Many viewed birth parents as making “bad choices” that led to their pregnancy, and described a “pathology of poverty” in which the negative traits associated with poverty were viewed as contagious—and, consequently, the adoption was a redemptive way out. Not so different, then, from the type of “redemption” that Solinger describes as being available to women 50 years ago.

Though a small study, the implications here are profound. Sweeney’s findings represent challenges for those in the adoption community: agencies that unwarily allow culture-of-poverty discourses to influence discussions of adoptions; adoptive parents who view their child’s family of origin as substantially different from their own; birth/first families who attempt to negotiate ongoing openness in their adoptions across a cultural divide that is both real and manufactured; and adoptees who must develop an identity that reconciles both their adoptive parents’ ideas of their original families and their own feelings about their origins.

Sixth grade, and it's time for History Fair.  Zoe chose international adoption as her topic.  She still has a week before the display board is due, but the rough draft of her "reflection paper" is due tomorrow.  Here's what she came up with:


International adoption started after WWII. Children orphaned in the war were adopted in Belgium, England, and the U.S. Transracial adoption means adoption where the race of the children and the parents are different. An example of that would be an African American family adopting a child or children from China. Some of the first transracial adoptions in America were white families adopting Japanese children after the war.
International adoption often happens in very poor countries. Example: China was a very poor country. Another example is Guatemala because the money that international adoption brings to Guatemala caused people to break laws to find children to offer for adoption. Sometimes, people would buy children so they could then place them in adoption for large adoption fees. Sometimes children were stolen from birthparents. Many countries worried that the adoption process in poor countries was not being handled right. That’s why governments got together and drafted the Hague Convention.

are happy. Some sad parts are that sometimes adoption doesn’t always work the right way like in

Guatemala. Some happy parts are that children have families.
Posted by malinda at 5:56 PM 3 comments: