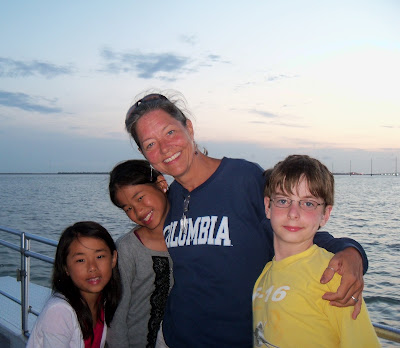 Well, our last day on the island was a doozy!  It started out fine, going to the beach around 11, but deteriorated rapidly when my mom got really sick and almost passed out.  I ended up calling 911, the ambulance came, and they took her to the hospital -- diagnosis:  dehydration.  It seems that the antibiotics she was taking should have said not only to stay out of the sun, but also to stay out of the HEAT!  She's much better now, though feeling a bit foolish about going to the hospital for dehydration.  But I don't know how we would have gotten her rehydrated without two bags of IV solution, so it was definitely the right decision.

I was really lucky that my friend Lynne, who shared the conference podium with me, was also extending her stay for a brief vacation.  She took care of the girls while I shared ER time with Mimi.  The girls think Lynne rocks, and her 13-year-old son Quinn is da bomb!  They had fun at the pool and the beach after I called to say Mimi was doing fine.

When we finally got the all-clear from the doctor and made it back to the island, it was time for our dolphin-watching/sunset-viewing/fireworks-ogling boat cruise.  Mimi wisely stayed home, but Lynne and Quinn joined us.  It was really fun -- we saw brown pelicans (Zoe snapped this pix -- I think she has the makings of a wildlife photographer!), a pirate ship (the boat we were on was far more mundane) and, most exciting of all, dolphins (which are really hard to photograph)! 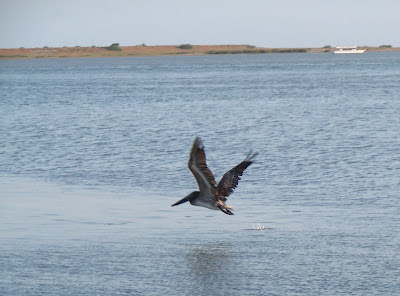 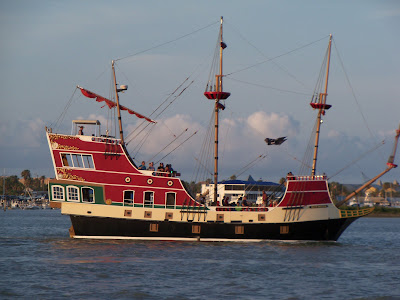 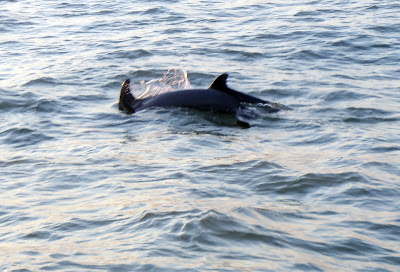 We didn't see a very exciting sunset, since the clouds were pretty low, but you can see a smidgen of pink as we head toward the causeway joining the island to the mainland. 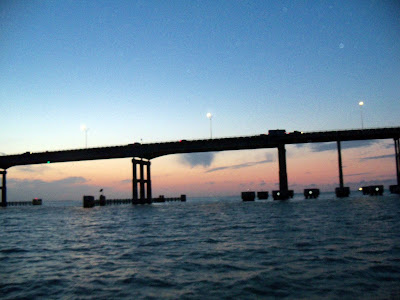 We soon passed under the causeway toward the fireworks area.  The kids had a great time watching the show -- it was short, but we were so close it was super-exciting. 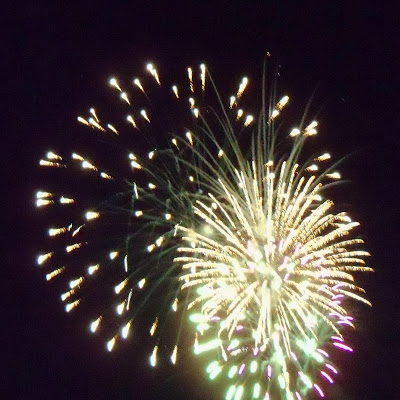 We head home tomorrow. I can't believe I was lucky enough to score this work trip -- turned into a really fun vacation!

Glad you had a great time! I love that area. Glad your Mom is ok, too. Scary stuff!