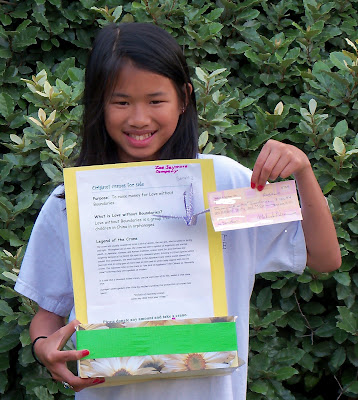 It all started in the waiting room at ballet.  Several of the younger sisters (Maya included) were inspired by the entrepreneurial spirit and the captive parent/sibling audience to raise money.  One girl sold candy.  One sold hair bows.  Maya sold bracelets.  Sometimes, the girls operated with a charitable motive, planning to give their earnings to "the poor."  Other times the girls were seemingly "the poor," using the money to buy sodas from the studio machine.  Zoe decided to show them how it's done!

She, on her own, decided to collect money for Love Without Boundaries, which she knows we donate to. And instead of selling a product, gave an origami crane as "free gift with your donation."  So for a few weeks she folded cranes, and then set her display on the table at ballet.  She collected a little, and set as her goal $100 by the end of summer.  She went around Mimi's active-seniors complex and collected more.  She set her display at the booth the FCC Girl Scout troop had at the Dragon Race to solicit bone marrow donations, and collected more money.  She went to my work, and collected a boatload of money!

All in all, before summer even really started, she surpassed her goal, collecting $133.44!

OK, I admit to a bit of mixed feelings about all this.  I'm extremely proud of her initiative, hard work, charitable feelings and follow-through.  But it feels odd, awfully close to holding her out as an object of charity, since everyone from whom she solicited knows she was adopted from a Chinese orphanage.  If it hadn't been solely her own idea, I would completely hate it. . . .
Posted by malinda at 8:02 PM

I think the fact that it was all her own idea is the key. Way to go Zoe!

Good for her for giving back! As an adoptee, it feels great to find a way to make my experience 'useful'. My brother (also adopted) works as a manager for a wards of the state facility, making sure kids who are taken from their parents have a good shot at a fresh start, and supplying them with someone how 'gets it' to some degree as well. I've spent 'big sister' time with some foster girls in the area as well, and also am looking forward to adopting.
Way to pay it forward Maya!

Malinda, please tell Zoe that I think she is a remarkable young lady. I am always inspired by young people who have such compassionate hearts that they not only think about people in need but take action to make a real difference in this world. Absolutely wonderful things can happen when one person says "how can I help?" Way to go, Zoe.

"If you haven't any charity in your heart you have the worst kind of heart trouble" to cure it Help people, let's unite for one good cause, be a volunteer"save live"!
mawaddainternationalaid