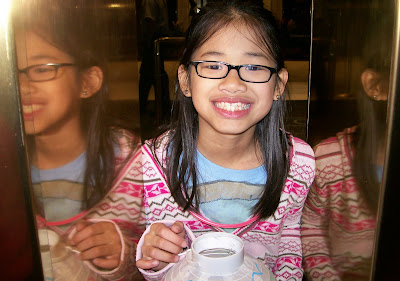 The kids and I have been talking off and on about Florent Amodio, the Olympic skater who was adopted from Brazil by a French couple. I said something along the lines of, "I think it's cool that you have something in common with an Olympian -- you're both international adoptees!"

Wow, what does that mean? She knows she's adopted. But is she rejecting the view of herself as adopted? Is she saying she doesn't want to be labeled? Is she clarifying that "adopted" isn't all she is?

So I asked, "Why aren't you an adoptee?"

Zoe's simple answer: "I'm just a kid whose adopted, not a grownup! Grownups are adoptees!"

I was talking to a friend of mine about this; S. is a professor of education who teaches a course about special education. She was reminding me of the importance of not labeling, and that with special needs kids, the preferred trend is to focus on the PERSON first. So it is a "person with autism," not an "autistic person."

An important reminder for how to talk about people who are adopted? I use the label "adoptee" for simplicity's sake, same for adoptive parents and birth parents. I've learned some things over the years, like being careful about the phrase "birth mother" for someone who is pregnant but has not relinquished -- that might be a "potential" birth mother, but she isn't a birth mother yet. I try not to use the term adopter, because some adoptive parents find it insulting. I often see the phrase "adopted person" instead of adoptee, but even that doesn't follow the "put the person first" rule.

This isn't just "political correctness." I believe that words do matter. "Adopter" seems to deny adoptive parents the title of parent. "Birth mother" for a woman who has not yet relinquish seems to suggest that relinquishment is a foregone conclusion. And a label like adoptee suggests a singular identity instead of a whole person.I'm still pondering the issue of "adoptee" v. "adopted person" v. "person who is/was adopted (is or was is the subject of another post!)" -- any advice?
Posted by malinda at 1:02 PM

I work with people with mental illness and brain injuries and have gone to great lengths to use people first language. Funny, I didn't even think about it with adoption. I don't think of the labels as stigmatizing, but they are stil labels. We are all people first, no matter the label. I think you, no Zoe, raise a good point. Thanks!

I'm glad you wrote this post. Words do definitely matter. The choosing of words, especially the right to choose words, and often this choice is limited or taken away from those who are less-socially-powerful positions. The dominant voice in society is not that of people who are adopted or of mothers who have lost children to adoption, and thus others (especially the adoption industry itself) take it upon itself to create labels for us and apply them.

Zoe is not the only adopted child who does not like the term "adoptee." Some adults who were adopted as children don't like it either and prefer "adopted adult." Other terms used include "abandonee" and "abductee" by adopted people who feel these terms better describe their experiences and circumstances.

For myself, I use the term "natural mother" as it is the only adoption-related term I know that still encompasses the meaning that I am still a mother to the child I lost to adoption. "Birthmother" distinctly means a non-mother or former mother, and "first mother" can imply sequential replacement by a "second mother." "Natural mother" doesn't imply the adoptive parent is unnatural, but that adoption is a modern social institute. But 'birth mother' was a term created and applied by others to us, not chosen by us, and is an intentional way to say "You're not a mother any longer. All you did was give birth." I've been told this exact phrase many times, to my face and on-line and it hurts.

So, I definitely agree with you that words matter. Zoe is very mature for her age in accepting or rejecting those labels that work or don't work for her.

I've never minded being an "adoptee", but I can see how others would. I think Zoe is wise beyond her years for recognizing her opinion on what she wants to be called.

I have to agree with the others that Zoe is wise above her years in determining that there is a "label" she is not comfortable with.

And, as a First Mom with adoption experience, I don't have any advise for you that I feel is worthwhile. But, as a mom, who is more than just a mom who gave up her kid, I would suggest, from the experience, that you continue as you always have with your girls, as a mom outside of the adoption experience too, and wait for Zoe to give you a term she is more comfortable with.

This part is always so hard, no matter how we became mothers, to travel with our children. But, it's obvious you have given Zoe the comfort and knowledge to be whoever it is she needs to be, and I believe, with that assurance, she will find her place in the "labels" as well and will let you know what she is most comfortable with.

We, as moms, no matter what label somebody puts in front of it, can research, learn, and study everything we think might be best for our children only to learn, later on, that none of it applies to our own. And in those situations, I have learned it's best just to continue the openness, the discussion, and allow them to come to us, in time, with their own feelings about what it is they desire.

Zoe, just like her mom - you - strikes me as a very open-minded, thoughtful, stubborn and determined young lady, which, in turn, tells me that, because you have let her know her path, her feelings are her own to decide, she will let you know, in time, what she is comfortable with and won't leave any doubt when that time comes.

You are a great mother to her, Malinda. You've given her confidence along with freedom and I believe, with that, she will have no problem letting you know what, if any, "title" she is comfortable with.

Labels are stigmatising.It depends on who is using them and when. I personally don't mind adoptee because I am survivor of adoption no longer a victim.In certain circles I may be an abductee.
For children it's so important not to label which is why those T-shirts on sale are so offensive...seen those with adopted written all over them?
You've stepped way over the mark with your remark about the Olympian, suggesting something that maybe wasn't in your child's mind or knowledge.

Yes, it can. There have been other adoptive parents who say it implies they are unnatural because they did not give birth in the *natural* way to their adopted children.

No, Mei-Ling. Is implies that the mother is a mother by the laws of natural, instead of being a mother by the laws of society. Child adoption as an institution was first created by a law passed in 1851 in Massachusetts. It then spread from there to NZ, Canada, the rest of the U.S., the U.K., etc. It is not found in nature (however, fostering is). If something is socially-created, man-made as it were, it does not mean it is unnatural. That's were the separation is.

Example: Cornflakes are a good food, perfectly wholesome, and yet man-made. They are not artificial. Blueberries are found in nature (at least near where i live, they grow wild). Both are good foods.

If one holds to the "it must be opposite" line of thought, then the opposite of 'birthmother' would have to be 'deathmother' and I think we both agreed that this is a silly term.

The term "natural mother" goes back as early as the first adoption laws. It was not coined to mean a 'non-mother.'