Get On Board the Orphan Train 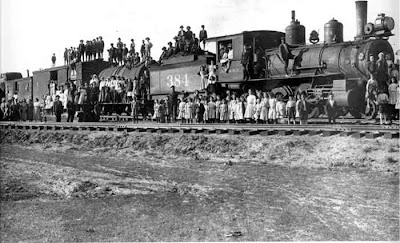 I'm teaching Adoption Law this week -- a special intensive one-week course.I have 100 students, and I started the class by welcoming them to "Adoption Law Boot Camp." Meeting 6 hours a day for a week is pretty brutal, but I try to mix things up to keep students awake and learning. One way to do that is to show videos. Monday morning's video to accompany the history of adoption was the Orphan Trains, which I recommend highly -- it's not just informative, it's honestly emotional and powerful.

Here's a little explanation of the Orphan Train movement:

The story of this ambitious and finally controversial effort to rescue poor and
homeless children begins in the 1850s, when thousands of children roamed the streets of New York in search of money, food and shelter--prey to disease and crime. Many sold matches, rags, or newspapers to survive. For protection against street violence, they banded together and formed gangs. Police, faced with a growing problem, were known to arrest vagrant children--some as young as five--locking them up with adult criminals.

In 1853, a young minister, Charles Loring Brace, became obsessed by the plight of these children, who because of their wanderings, were known as "street Arabs." A member of a prominent Connecticut family, Brace had come to New York to complete his seminary training. Horrified by the conditions he saw on the street, Brace was persuaded there was only one way to help these "children of unhappy fortune."

"The great duty," he wrote, "is to get [them] utterly out of their surroundings and to send them away to kind Christian homes in the country."

In 1853, Brace founded the Children's Aid Society to arrange the trips, raise the money, and obtain the legal permissions needed for relocation. Between 1854 and 1929, more than 100,000 children were sent, via orphan trains, to new homes in rural America. Recognizing the need for labor in the expanding farm country, Brace believed that farmers would welcome homeless children, take them into their homes and treat them as their own.

In adoption history, this is considered one of the largest experiments of the "child saver" movement. After this time, Children's Aid Societies worked to alleviate childrens' poverty by caring for the whole family instead of removing children from their families (perhaps not surprisingly, this change happened at a time when women were heads of Children's Aid Societies).

One similarity I see between this child saver movement and the current child saver movements (including but not limited to the "Orphan Sunday" crowd), is the liberties taken with the word "orphan." So who is an orphan? Look to the dictionary, and you'll learn that the word comes from Greek (orphanos) and Late Latin (orphanus), and means "a child whose parents are dead."
On Charles Loring Brace's Orphan Train, hardly any of the children were actually orphans. Almost all of the children had at least one living parent. Some of the parents had children removed because of abuse, akin to involuntary termination of parental rights today, and some parents relinquished parental rights, but other children were simply residents of orphanages because of illness or poverty of their living parent or parents. One woman on the video talked about the day she was told she was taking the train to Texas to find a new family, and she told the orphanage matron that she couldn't go -- she had a mother in a hospital right in New York. She was told she was going anyway.

In E.J. Graff's Foreign Policy article, The Lie We Love, she noted that statistics about the number of orphans in the world are based on that skewed definition of orphan:

UNICEF itself is partly responsible for this erroneous assumption. The organization’s statistics on orphans and institutionalized children are widely quoted to justify the need for international adoption. In 2006, UNICEF reported an estimated 132 million orphans in sub-Saharan Africa, Asia, Latin America, and the Caribbean. But the organization’s definition of “orphan” includes children who have lost just one parent, either to desertion or death. Just 10 percent of the total—13 million children—have lost both parents, and most of these live with extended family. They are also older: By UNICEF’s own estimate, 95 percent of orphans are older than 5. In other words, UNICEF’s “millions of orphans” are not healthy babies doomed to institutional misery unless Westerners adopt and save them. Rather, they are mostly older children living with extended families who need financial support.

I've blogged before about these weird definitions of orphan, including in the proposed Families for Orphans Act, which turns anyone under the age of 21 living in an institution, including a hospital or dormitory, into an orphan. Tell that to all the freshmen and sophomores living in dorms at colleges around the world!

So it seems there's nothing new under the sun -- in 1853, the emotional appeal of the word "orphan" was used to justify Charles Loring Brace's child-saving movement. And today, we throw that inaccurate statistic around -- there are 132 million orphans in need of families -- to play on emotions and justify international adoption. In both instances, we separated existing families in order to save the child, when we could be supporting the family and prevent the child from becoming an orphan in the first place.

I recognize that I'm vulnerable to the charge of hypocrisy here, since my children did not meet the definition of orphan -- or at least no one had any idea of whether they were actually orphans whose parents were dead -- and I adopted them anyway. Guilty as charged. I will say in my defense that I was satisfied at the time that their birth parents were unfindable and that they could not be returned to an existing family. But then one of my favorite movie quotes is from The Big Chill: "I don't know anyone who could get through the day without two or three juicy rationalizations. They're more important than sex."
Posted by malinda at 12:47 AM

OMG--you and I share a brain. Have been blogging this morning about what I don't like about the phrase "the orphan" and how it twists meaning. Am not done yet--will link to your post for sure.

It is so important that people understand the truth behind the term and the real numbers besides the hype. Language is so powerful, I don't think many people consider that when they hear stats/calls for donation/etc.

Terrific post Malinda. I pulled up Graff's Foreign Policy article and it's excellent. Thanks for the reference. I'll also check out "Orphan Trains."

Keep writing! I always learn something from your posts.

Thanks for the link to the Orphan Trains resource. I remember reading about them in high school history classes, and doing more research at our local library for my own information-gathering.

I remember even then wondering at the convenient (and certainly NON-standardized, unethical) way "orphan" was defined. I remember being horrified at the thought that some people actually profited financially (and other-wise, of course) from the circumstances of these homeless children.

Also closely connected was my horror at the way children were treated in the factory and manufacturing industries then.