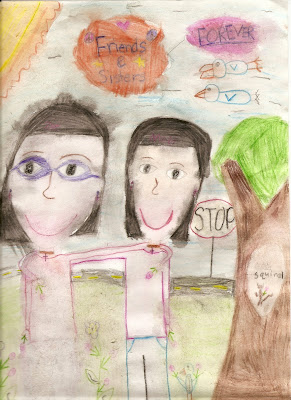 I always get sappy about Zoe and Maya as sisters. They really are amazing together, closer than most sisters connected by biology, I believe.

A disgusting case in point -- Maya bites her nails (I have to say "her nails" not "her fingernails," because she's been known to bite her toenails, too!). As we were getting ready this morning, I'm only half paying attention, I confess, when I heard Maya saying something that included the words "bite," "nails," and "Zoe." Took me a minute to figure out the sentence, then I asked for confirmation, "What did you say?!" Maya first said, "Never mind," maybe realizing I wasn't going to like what I was about to hear. I insisted, "No, you were saying something about Zoe and biting nails. What was it?" Maya, always truthful, replied, "Last night, I bit Zoe's nails. I didn't have any left, and she asked me to!"

Every family is different, I know, and the ability or desire to adopt siblings for an adopted child is a personal choice. But at a forum I read, there was a recent discussion about whether it was important for a transracially adopted child to have a same-race adopted sibling. Intuitively, I have the sense that the answer is yes. I didn't have much to add to the discussion, but did recall that there was something about it in the Evan B. Donaldson Institute report, Beyond Culture Camp: Promoting Healthy Identity Formation in Adoption, about Korean adoptees:

While the listing of experiences/services in the survey did not specify “adopted” siblings, almost all of the respondents with brothers or sisters reported having adopted siblings, so we can likely assume that having a sibling who also was adopted was the context of this support. Previous research has found that for transracially adopted young adults, having only a sibling born to their adoptive parents was associated with maladjustment (Brooks & Barth, 1999). Also, Korean adoptees participating in the “Gathering” reported that having a sibling from Korea was a source of comfort and support (Freundlich & Lieberthal, 2000).

Not very definitive, hmm? There are no absolutes about this. I think Zoe and Maya are very fortunate to have each other, for lots of reasons including the support they give each other on issues of adoption and race. But I also think if I had decided not to adopt again after Zoe, things would still work out well for her. And I was reminded of this issue of same-race siblings today because I showed my Adoption Law class Adopted: The Movie. I was again struck by the extraordinary support Korean adoptee Jen got from her only sibling, the brother born to her white adoptive parents. So this probably falls in the "it depends on the individual" category . . . .

And yes, Zoe is the artist featured above!
Posted by malinda at 9:12 PM

Great story. And, I love the picture. I hope you have it in a frame!
Syd told me just the other day she wanted a sister from China. "Not a little one," one her age "to play with and we could be best friends."

Of course I love LOVE LOVE reading your blog. This is such an interesting topic! So many questioned us when we adopted two biologically unrelated children at the same time. (since we have been back, the laws have changed and you can no longer adopt two biologically unrelated at the same time). Anyway, after being home for 4 years I can honestly say I can't imagine one without the other. :-) Being so close in age they have learned so much together and will always have such a special bond. It may not be biological, but it is special. Just like you have described, my two are so in tune with each other's needs. Be it nails :-) or just general protection. Thank you so much for all you share :-) I so enjoy it :-)
--Stephanie Davis

My daughter asks for a brother or sister almost daily. We would love to adopt a second child from China and have been waiting for 2.5 years with no end in sight. In place of a sister we talk about the other family in our town who have twins from our daughters SWI as her Yangxi-sisters, and our daughter is very happy to embrace them as kin of sorts. We get holiday cards from some of the families from our travel group and my daughter is always excited to learn more about them. I was an only child, and happy being an only child, but in the pit of my stomach I feel like my daughter needs a sibling. I am not sure if a sibling is in our future I I hope so.

You adopted at the right time. I am in the same boat as Travelmom, but we have been waiting over 3.5 years... with no end in sight. Consequently, i don't know if it will be in our family's (specifically, our daughter's) future.