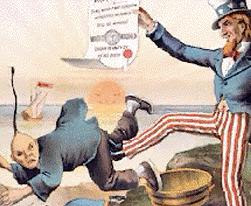 I came across this post discussing the origins of Labor Day, which identified the late 1800s as the start of Labor Day, with over half of the United States recognizing Labor Day by 1894.

The time period struck a chord, and I wondered about Chinese-American workers at that time, and how they were being “honored.” I still think the best account of the Chinese in America comes from Iris Chang’s book, The Chinese in America. But not wanting to type out a whole chapter from that book, I thought I’d share Asian Nation's short history lesson:

Chinese Americans are the oldest and largest ethnic group of Asian ancestry in the United States. They have endured a long history of migration and settlement that dates back to the late 1840s, including some 60 years of legal exclusion. In the mid-l9th century, most Chinese immigrants arrived in Hawaii and the U.S. mainland as contract labor, working at first in the plantation economy in Hawaii and in the mining industry on the West Coast and later on the transcontinental railroads west of the Rocky Mountains.

But few realized their gold dreams; many found themselves instead easy targets of discrimination and exclusion. In the 1870s, white workers' frustration with economic distress, labor market uncertainty, and capitalist exploitation turned into anti-Chinese sentiment and racist attacks against the Chinese called them the "yellow peril." In 1882, the U.S. Congress passed the Chinese Exclusion Act, and later extended to exclude all Asian immigrants until World War II. The number of new immigrants arriving in the United States from China dwindled from 123,000 in the 1870s to 14,800 in the 1890s, and then to a historically low number of 5,000 in the 1930s.

Legal exclusion, augmented by extralegal persecution and anti-Chinese violence, effectively drove the Chinese out of the mines, farms, woolen mills, and factories on the West Coast. As a result, many Chinese laborers already in the United States lost hope of ever fulfilling their dreams and returned permanently to China. Others, who could not afford or were too ashamed to return home, gravitated toward San Francisco's Chinatown for self-protection.

Still others traveled eastward to look for alternative means of livelihood. Chinatowns in the Northeast, particularly New York, and the mid-West grew to absorb those fleeing the extreme persecution in California.

I’m sure one could write an entire thesis on who has been left out of the celebration of American workers (someone probably already has!), and it would probably start with our horrific history of slavery. But thought y’all might be interested in hearing a bit about the historical treatment of Chinese-American workers around the time we first decided to honor American workers.
Posted by malinda at 12:04 AM

I would also recommend Yellow by Wu, great book full of information--a must read imo.

I have been reading Iris Chang's book, The Chinese in America, for months. Slow going, but worthwhile. One thing that strikes me is that it shows how irrationality and irateness in public discourse and government action is nothing new. If you think that what's going on these days is bad, all you have to do is read about history to realize that it has been much worse. What the Chinese went through was terrible, both in the U.S. and in China/Taiwan.
Sue (aka anonymous)