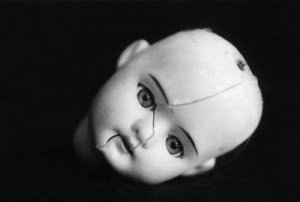 I suspect we've all heard it -- someone "complimenting" our child by saying she looks just like a "China doll." We've all certainly read the China-adoptive parent discussion lists where APs describe their own children as China dolls. I've always hated the expression -- it's objectifying, stereotyping, and for adult women, infantalizing. Jha'Meia at Rebellious Jezebel Blogging, reacts to the phrase as applied to photos of her:

The term “China doll” unsettles me. It unsettles me because I’ve met people who coo and squee over Asian girls because “they are so cute”. I have trouble with the term because it ties into the whole “submissive Asian” trope. It bothers me because I am Chinese, and the term “China doll”, which could characterize all Chinese women who fit a certain physical look, effectively strips us of our agency in the eyes of others, rendering us, well, dolls.

I took a hard look at that set of pictures. I also thought back to other times I wore similar makeup. I generally avoid heavy makeup for this reason: looking like a China
doll. But even as I was avoiding the “China Doll” look, I neglected to ask what the hell, exactly, a “China doll” looks like.

Then I realized, no matter what makeup I wear, I will always look like a “China doll” to someone. I can’t help that – I’m Chinese! I can’t dictate that everyone think of me as a normal human being – there’s no way I can police that. I can’t help it that some people don’t think women should be wearing such striking makeup to begin with. I can’t help it that people stereotype Asians.

Like many other things, the term “China doll” refers to a construct, an idea of what something should be like. A China doll will look like what the viewer wants her to look like. She can range from simply being an Asian woman, to being a fetishly hyper-sexualized submissive. It doesn’t matter. What matters is that this is a stereotype, and one damaging to Asian women.

I get this almost every time I go out with my daughter. She is a beautiful child who always turns heads. I abhor the term "China Doll" with a passion I can't describe. It almost always comes from well-meaning older folks. I don't have the patience nor the right words to correct people at this point. I'm open to suggestions!

I do not want to avoid taking my daughter out, but often come home exhausted by the stares & attention we seem to draw. BTW, we plan to move to an area with a much higher Asian population in the near future. We are currently in a smaller city with a non-diverse population.

We aren't China dolls when we grow up.

We just get the "Would you have preferred to grow up in the orphanage?" mantra.

No one ever said this to DD. Too big and too unsmiling! These days, she is mysterious and looking older than her years at 5'5". Sunglasses but no make-up. She has the don't-mess-with-me-image down pat, a fact I get down on my knees for every day. I DO, however, notice guys from 15 - 35 looking at her! Eeeeuuuuwwww! Is it really true? Is there a segment of the male population that is just stuck on Asian girls and women?

In a business context, I recently complained about a picture I characterized as "China doll" being used on the cover of an educational product about to be launched internationally. I was up against two guys. They found the image delightful. I poked holes in it in a number of ways but they wouldn't budge. *sigh*

Never. Not once. Of course we do get "Is that her real hair?" "How long will her hair be so blonde?" "I had a cousin/nephew/son/daughter with hair like that!" and a host of others. The closest I've heard is, "She has such beautiful Eurasian features." I wasn't how to categorize the objectification there. Was it there? Felt like it.

Sorry, I just wanted to say to Holly: great call. Where we live, diversity is not an issue. I'm just talking about the general stares girls receive. But if your daughter is the subject of stares and comments because she is ethnically unique and viewed as an exotic flower, I think it's terrific that you'd commit to moving. A lot of a-parents do not get how this affects the adoptee. I can't think of a polite thing to say to the oldsters either. Sorry, if I do, I'll try to post about it.

I've gotten that comment a few times when my girls were younger. I usually just smiled and walked away to prevent further conversation. I suppose one could say something like, "Thanks, she is cute, isn't she, but of course, she is not a doll!" My girls are old enough now that we don't get many comments anymore.
Sue (aka anonymous)

We have had it many times, mainly with older people. It has depended on the circumstances whether I have "corrected" them or not.
The biggest issue I have is with AP's who call their girls that--there are two in my area alone! I have tried to educate them, but they just don't get it. Sad.

We heard this quite a bit when the Tongginator was younger. Our experiences typically mimicked Holly's experiences... well-meaning older folks.

Typically, if it was a one-off encounter, I would smile, then quip wryly something along the lines of, "thank you... though - of course - she isn't a doll, as she reminds us every morning at 6 AM on the dot."

If it is a person we have an ongoing relationship with, we typically explain the term. All but one have felt horrified that they offended... and never used the term again in our presence.

Now that the Tongginator is older, we don't typically hear this anymore.

I am one of the "older folk" who have used the term "china doll" as a compliment, and which has caused some pain and rage to mothers who blog or comment here.

Please note that the expression
"china doll" is spelled with a
small letter "c". Its use has nothing to do with China or with your child's ethnicity. It is used by us older folks to refer to any adorable,beautifully-dressed little girl of any ethnicity.


Many years ago, the best, most cherished and most expensive dolls were made with porcelain or china heads and bodies. They were dressed in beautiful clothing and were handled with care. We older people use the expression "china doll" for any adorable, well-dressed little child, because we heard it from our mothers and grandmothers, who remembered having such dolls or who longed for such a doll, years before adoptions from China.

Please read the Wikipedia entry for "china doll". I hope this
historical explanation will help assuage some of the hurt feelings and rage caused by the innocent misunderstanding of this old, non-ethnic compliment.