There are so many little things I've been meaning to blog about, none of which seemed worthy of a whole post, or if it does seem worthy, I don't have time for! So I thought I'd try to slap up a list/mini-posts of some of them:

1.  I am so proud of Zoe -- she decided to run for Student Council!  Results released today, so I don't know if she won (about 2/3 of her class ran, so it's hard to call!), which is why I wanted to post NOW.  Because it doesn't matter if she won.  I'm just so amazed that she ran! At her age, I wouldn't have had the courage, the potential rejection would have kept me off the ballot! In her "campaign speech," limited by the rules to 90 seconds, she said she wanted to help make the school a better place, with two planks to her platform:  expanding the school's recycling program beyond paper, and enacting a bullying prevention program "because I've been bullied before and people need to learn to stand up for themselves!" Oh, and in case you're thinking she's too stuffy for words, she's also proposing Taco Tuesday and Wok Wednesday for the cafeteria menu, and Pajama Day and Crazy Hair Day as school-wide celebrations. . . .

2.  We went to see Chimpanzee the first day it was showing, and the girls loved it. The cinematography was amazing, and even more amazing is how a bunch of humans managed to get all that footage! The anthropomorphizing was very strong, of course, and it would have been interesting to see the movie without the narration to see if we would have put the same human interpretation on the animals' conduct. Afterward, talking to the girls about the adoption themes, they were very intent on pointing out how different the story was from their adoptions. Zoe first noted that Oscar, the baby chimp, got to stay with his birth mother for a long time, unlike her. And Maya pointed out that Oscar's mother died, "she didn't just leave him somewhere." Their disparate responses are so like them -- Zoe who misses her birth mother and wishes she'd stayed, and Maya who says she doesn't think about her birth mother much, but who harbors anger about abandonment.

3. For Spanish class, Maya had to research Chilean culture, and in the course of the project, I found a Pablo Neruda poem I love:

Brown and agile child, the sun which forms the fruit
And ripens the grain and twists the seaweed
Has made your happy body and your luminous eyes
And given your mouth the smile of water.

A black and anguished sun is entangled in the twigs
Of your black mane when you hold out your arms.
You play in the sun as in a tidal river
And it leaves two dark pools in your eyes.

Brown and agile child, nothing draws me to you,
Everything pulls away from me here in the noon.
You are the delirious youth of bee,
The drunkedness of the wave, the power of the wheat.

My somber heart seeks you always
I love your happy body, your rich, soft voice.
Dusky butterfly, sweet and sure
Like the wheatfiled, the sun, the poppy, and the water.

4. Have you watched the Anderson Cooper (CNN) special on race and children? It didn't really reveal anything I didn't know, but it was nonetheless fascinating.  It confirms what I blogged about here -- not talking about race with our children doesn't make them colorblind, it makes them convinced that their parents don't like people of other races.  Also interesting was the change between age 7, where kids thought it was ok for kids of different races to be friends, and age 13, where more of them said it wasn't ok.  Why the shift?  The experts said it was that at that age, kids are starting to get different messages about race from their parents because of their parents' concerns about interracial dating.

5.  Last week, at a restaurant, I was talking to a friend about the Anderson Cooper episode on race and children while our kids played.  As we were leaving the restaurant, I spied the special being replayed on television, stopped and pointed it out to my friend.  The kids stopped, too, and watched for a moment a segment where an African-American boy was saying that he didn't think kids with different skin could be friends.  Maya immediately turned to me and said, "That's just sad! Why does he think that?!"  We had a long talk about it on the drive home.

6.  Ballet recital is coming up, and Sunday was picture day, which means too much makeup and cool costumes and showing off at Mimi's over-60 apartment complex, where the girls are always a big hit.  That led to an after-photos photo shoot there: 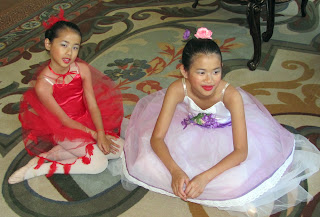 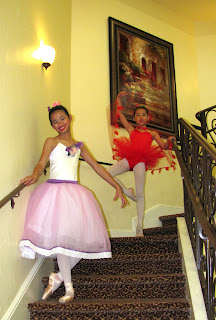 The ballet this year is Hansel & Gretel; Maya is a redbird (who wickedly eats the trail of bread crumbs) and Zoe is a villager (who is obviously well-to-do given the princessy costume!).

7.  Has anyone heard anything about the Encarnacion Bail Romero trial?  That's the undocumented worker who lost her son to adoption while she was in jail.  After reversal of the case by the Missouri Supreme Court, there was a trial over the issue which started in February. I haven't found any news in the media at all since the first day of trial. No hint of the court's ruling.  Anyone out there know anything?

8.  Oh, and how about another birth-mother-as-pass-through-body story?  Edie Falco, in this People article, tells us, “The second you are handed a newborn it is yours. It doesn’t matter what body it came out of. I’ve never felt more strongly about anything in my life."  Sheesh. How dismissive and cruel to think of your children's birth mothers in this way.  And this after saying that she's going to wait a while before explaining to her 8-year-old (8-YEAR-OLD!) that not everyone is adopted: “I’m thinking I’m going to wait with that as long as I can, the fact that some of the ladies keep the babies for their own. We will get to that.”  And THAT after saying the stigma of adoption just doesn't exist the way it used to -- what exactly does she think her actions are showing her kids about the stigma of adoption?! It's so effing stigmatizing she can't even bring herself to tell her 8-year-old the truth about it! (OK, maybe I could have done a full post about this one!)

9.  Last night on the Jon Stewart show (yes, that's where I get all my news, though I'm far too old for the target demographic!), he interviewed Zach Wahls, the 20-year-old author of My Two Moms. You may remember him from this video of him addressing the Iowa House Judiciary Committee about full marriage equality. I just downloaded it to my Kindle as my Mother's Day present.  We may have only one mom in our family, but I figured I could learn a lot from this nontraditional family!

10. Remember the millionaire polo tycoon who adopted his adult fiancee so that she could share in a trust he was trying to keep away from the family whose son he'd killed in a DWI accident?  Well, in case you're curious, John Goodman was in fact convicted for that drunk driving homicide. Still doesn't answer the question about the legality of the adoption, given its non-traditional purpose, or what effect it will have in a civil law suit by the victim's parents, but still, a guilty verdict.  Yesterday was supposed to be the sentencing hearing, but it's been postponed until May 11, because a juror testified that he felt pressured into the guilty verdict, and that he wasn't convinced of the defendant's guilt. Six other jurors and two alternates said there was no pressure.  I don't think the defendant is likely to get a new trial because of the issue, but we'll have to see. That alone shouldn't do it, but it looks to me like the defense is gearing up to complain that this is proof that the trial court should have moved the trial to another location because Goodman couldn't get a fair trial in Palm Beach, and that's a more persuasive claim. Goodman faces up to 30 years in prison.
Posted by malinda at 9:57 AM