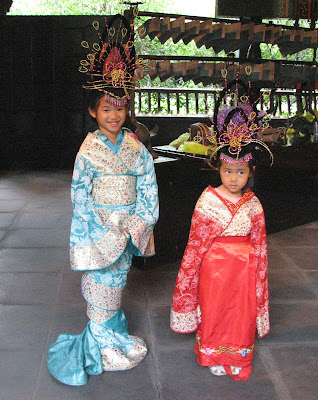 I just watched PBS' Finding Your Roots with my kids. I wasn't planning to, but they came in on the Ellis Island segment, and Maya wanted to see that part since they studied Ellis Island this year. Then they became mesmerized by the rest of it.

Interesting reactions from them, about ancestry and birth parents and knowing and telling kids about adoption. They're helping me write this post, I'm mostly just taking dictation!

Zoe thought the show was cool because people got to learn about their ancestry and where they came from.  Like Margaret Cho who thought her family came from Korea, but it turns out her genetic roots are actually in China.  Zoe wondered if the show ever did adopted people, and I explained the difficulty in doing so, when original birth certificates are hidden away so that adopted people can't know the names of their birth parents.  Makes for a short search.  Zoe also wondered if a DNA test could show her relatives, and I explained that you need someone else's DNA for comparison to find out if someone is your relative.  She immediately pointed at Maya, saying she thought it would be cool if they were not just adopted-related, but were birth-related.  I asked if it would make a difference -- would she love Maya more or less?  Zoe said no, but it would be cool.

Maya thought it's nice that the grown-ups on the show get to know a little more about their ancestors that they had no idea about.  People don't really know a lot about what's happened to their families, she said, but she would like to know what happened to her biological family.  She said she'd like to know about her actually from-birth ancestors, not about my ancestors.  It wouldn't be the same thing, she thought, for adopted kids to just learn about the adopted parents' ancestors. Zoe thought you could learn about your adoptive parents' ancestry, but it wouldn't help you like learning about your OWN ancestry.

I mentioned a lot of grown-ups, including me, don't know much about our ancestry.  They both thought they felt different about it because they're adopted.  Zoe thought since adopted people don't even know their birth parents, it makes you want to know more about where you came from.  [Indeed.]   She said if you knew the names of your birth parents then you could learn about them, and learn more about your ancestry that way.  Maya thinks it's important that adopted kids know they were adopted, so they know they had another family. But she thinks parents are sort of afraid to tell their kids because they think maybe their kids won't love them if they find out. It's silly to think that, Maya says, because you have two families in one, and they should be ok with that.  Zoe thinks knowing more is always better than not knowing.

Maya said she didn't know even one little thing about her birth parents.  But Zoe said she knew a few things, like they existed.  And if you're from a different country, you know that's their heritage (or at least you think you know! (see Margaret Cho)).  Maya said we can know some things about them because maybe they like the same things we do, like music and dance.  Zoe thought you also know a little about what they look like based on what you look like, like black hair, Chinese eyes, tan skin.

Not gonna lie, but this post gave me a little teardrop in my eye. How awesome that your girls feel so comfortable to not only watch a show like this with you, but to discuss it with you!

Maya certainly did have the best quote!

I'm hooked on this show and on Who Do You Think You Are. Aidan is too little to understand (and then put into words for an extended conversation) most of what she watches but we usually watch both as a family and talk together with all of us about the things we hear and see. It is setting a nice stage for growing conversations. Our bio family history has adoption back in the gold rush era so even before she came home we had these conversations while Grandpa was doing the research. I so enjoyed learning about my husband's family's adoption story and knew it was going to be a good tie in for all the other kids along the way.... My only wish is that they offered that kind of extensive support and research to regular Joe Blows instead of just featuring celebrites.